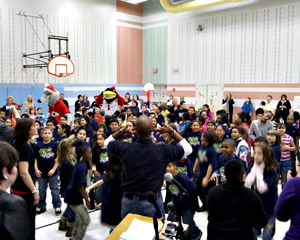 A former pro football great joined Governor Terry Branstad at a Des Moines elementary school today to talk to kids about the importance of eating healthy foods and exercising.

Branstad told the children at Capitol View Elementary that the NFL’s “Fuel Up to Play 60” program will help his administration’s goals for the state.

“We aim to be the healthiest state in the nation within the next five years,” Branstad told the school kids. He and other state officials signed a pledge to show their support for the program, now in place in more than 1,100 schools across Iowa.

“We are working together to make our state healthier every day and the effects are being felt by Iowans of all ages,” Branstad said.

“It’s really exciting to see the commitment you’ve made, right here, at Capitol View Elementary.” The Fuel Up Play 60 program encourages kids to consume “nutrient-rich” foods and be physically active for at least 60 minutes every day. 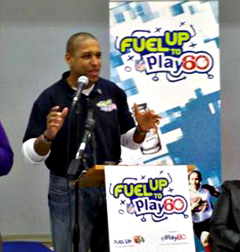 The program is backed by the National Football League and the National Dairy Council. Former NFL wide receiver Eddie Kennison shared some of his nutrition secrets.

“The thing that I found out to work best for my body after a workout is chocolate milk,” Kennison said. “Once you go through a tough workout, I encourage you guys to drink chocolate milk because it has more of the antioxidants and natural fuel you need to put in your body…better than a lot of the other drinks that are out there.”

Kennison was a first round draft pick by the St. Louis Rams in 1996. He played 13 seasons in the NFL and had his best years with the Kansas City Chiefs. Kennison is pulling for the New England Patriots to beat the New York Giants in the Super Bowl.

A former teammate of Kennison’s in Kansas City, Brian Waters, now plays for the Patriots. Waters, an offensive guard, was let go by the Chiefs earlier this season. Kennison said he’s “kind of torn” about which team to root for because he also was a teammate of Lawrence Tynes in Kansas City.

Tynes is now the kicker for the Giants, but Kennison said he’s pulling for Waters and the Patriots because Tynes already won a Super Bowl with the Giants in 2008.