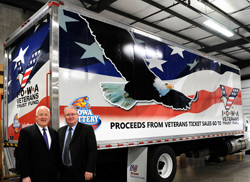 The state agency that handles liquor sales has teamed up with the Iowa Lottery to create a couple of rolling lottery advertisements.

The Iowa Alcoholic Beverages Division (ABD) has used space on the sides of its delivery trucks for several years to promote tourism through the “Iowa Great Places” program.

A.B.D. spokesperson, Tonya Dusold, says this expands that program to another area. “This is the first time we’ve partnered with another state agency beyond the Great Places program,” Dusold says.

The Iowa Lottery has two trucks in the program, one promotes the veterans tickets that raise funds for the Iowa Veterans Trust Fund, and the other truck promotes the “It’s Your Dream Anything Can Happen” game.

Dusold says the trucks travel some 800 to 1,000 miles each week, delivering the alcohol purchased by retailers across the state. She says the trucks are a good way to spread the word about the lottery products.

“The spirit of state government right now is what can we do to help each other out and use the least amount of resources and not do double duty. And so the idea of this came kind of between our administrator Stephen Larson and the Lottery C.E.O. Terry Rich on how we can partner and get their message out for very little to no cost to either agency,” Dusold says.

Dusold says the Iowa Lottery paid for the advertising wraps that go on the trucks. She says those wraps can cost between $2,000 and $5,000. Dusold says it made sense to fill in the blank sides of the trucks as they were already out on the road and the sides were blank.

She says A.B.D. is reaching out to other agencies who might be able to take advantage of the rolling advertising on their trucks.

The latest truck in the Great Places program just hit the road and features the city of Decorah. Dusold says there are now 13 semi trailers that feature Iowa Great Places on their sides.

There are plans in the works to add Appanoose County, Council Bluffs and Perry images on the A.B.D. trucks in the coming months. Dusold says it’s estimated trucks provide $60,000 in advertising each year to the Iowa Great Places areas featured on their sides.