You are here: Home / Human Interest / Popular Celtic band to make one stop in the Hawkeye State 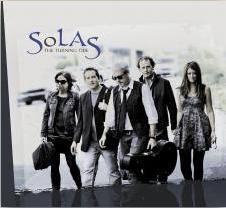 St. Patrick’s Day is coming a month early, as what’s considered the most popular Irish music band ever to emerge in the United States will play one show in Iowa in a few weeks.

The band’s name, Solas, come from an Irish word for light.

Clark Williams, president of the Des Moines-based Celtic Music Association, talks about the sound of the five-member group, with roots in Philadelphia, Boston, New York — and Ireland.

“I’d describe them as an American Celtic music band,” Williams says. “Not really classified as an Irish band, but a Celtic band.” He thinks the style will appeal to a wide spectrum of Iowans of all ages.

“The Irish type of jigs and reels and all that actually metamorphosed into a bluegrass sound, into Appalachia and now country-western music,” Williams says. “I look at the Celtic music and Solas music as being a very pure version of that type of music.”

Solas will take the stage at Hoyt Sherman Auditorium in Des Moines on February 18th.

Williams says, “We want to make sure our audience, which has been so nice to us in coming to all of these concerts all of these years, keep returning but we also want to have our young people get to know and understand some of this music.”

Learn more about the band at: www.solasmusic.com and the concert at: www.thecma.org