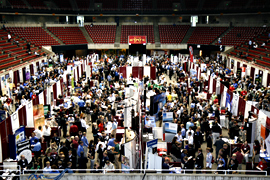 Engineers are in high demand in Iowa right now and today in Ames, more than 200 companies will be meeting with thousands of young people hoping to enter that line of work.

“I think the economy is just really picking up and we’re living in a much more technological world, so there’s a big demand for engineers right at the moment,” Larson said.

He’s helped organize the I.S.U. College of Engineering Spring Career Fair. The event runs from 12 to 6 p.m. at Hilton Coliseum and the Scheman Building.

Many of the fair attendees could end up with a job by the end of the week. “In the days following the career fair, we’ll have upwards of 1,200 interviews happening and many students will be walking away with full-time positions or intern/coop positions,” Larson said. Good job prospects and high salaries are among the reasons Iowa State and other universities are experiencing record engineering enrollments.

Larson notes the average starting salary for an engineer is just over $58,000 a year. A recent report in the Wall Street Journal stated seven of the top 10 highest-paying college majors are engineering degrees.