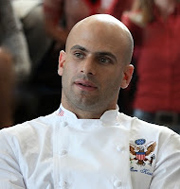 The assistant White House chef who is coordinator of the first lady’s food initiatives says Michele Obama’s trip to Iowa later this week is intended as a salute, a celebration and, hopefully, an inspiration to Iowa kids.

As you may know, the first lady launched an initiative aimed at America’s kids, to promote healthy eating habits and encourage exercise. The goal is to end childhood obesity within a generation. Over 10,000 Iowa kids are expected in Wells Fargo Arena in Des Moines Thursday to see First Lady Michele Obama and participate in “Let’s Move Day” in Iowa.

“We want to celebrate the great work that’s going on there, show how the country’s really unifying around these issues: trying to ensure that our kids and our communities are as healthy as they can be,” Kass said.

Republican Terry Branstad has been a vocal critic of Obama Administration policies, but on this particular issue he’s in harmony with Mrs. Obama.

“We share the goal of a healthier nation and people taking ownership of their own health,” Branstad said.

Private companies in Iowa are participating in the governor’s “Healthiest State” iniatitive, along with hundreds of individual Iowans who’ve signed up for this winter’s “Live Healthy, Iowa” 100-day weight-loss challenge. Kass, the chef in the White House, suggests one way to live healthier is to buy local.

“In Iowa, I know there’s great work being done to try to produce more food and more vegetables for Iowans to eat and, you know, we think that’s great,” Kass said. “But every community is going to have to step back and take a look at what’s happening around them and figure out what are the best solutions.”

Kass helped plan and plant the White House garden. From that garden experience, Kass understands kids can play a role in improving their family’s approach to food.

“When they dug up a carrot, they ended up taking it home and saying, ‘Mom, dad, let’s have some carrots tonight.’ When a kid’s asking for that, you can’t say, ‘No,'” Kass said. “We’ve kept in touch with these kids and they telling us how they’re eating (differently) in their home…They’re baking the chicken instead of frying it. That’s the true power and essense of all that we’re doing here.”

Thursday’s “Let’s Move” party in Wells Fargo Arena will feature some notable sports figures, like skater Michele Kwan, gymnast Shawn Johnson and NASCAR driver Carl Edwards. TV star Bob Harper — one of the trainers on “The Biggest Loser” — will be there, as will Iowa State basketball coach Fred Hoiberg, a former player in the NBA. Kass hopes Thursday’s event will be a motivating experience for the more than 10,000 sixth, seventh, eighth and ninth graders who’ll participate.

“I honestly believe, and I know the first lady does as well, that kids who are stepping up and making changes and being leaders in their communities is maybe our greatest tool in overcoming some of these challenges,” Kass said.

Kass has been involved in behind-the-scenes discussions about federal strategies that could improve the health of America’s children.

“Just two weeks ago, the first lady celebrated the finalizing of the new standards for school lunch and they’ve been raised for the first time in 15 years,” Kass said. “These new standards are going to be transformative to the food that kids are being served every day. Thirty-two million kids every day eat breakfast and lunch — or some combination — in our schools, so knowing that our kids are going to school eating the best food possible is just critical.”

The new standards call for doubling the amount of fruits and vegetables served in school cafeterias and cutting in half the sodium content in school lunches. Kids can still drink chocolate milk, but it has to be skim — fat-free — milk.