You are here: Home / News / Countdown to Chinese VP’s appearance in Iowa (audio)

Preparations continue for what Governor Terry Branstad has suggested may be one of the diplomatic events of the century in Iowa.

China’s vice president is due to visit Muscatine, then Des Moines next week and the Chinese consul general based in Chicago traveled to Iowa today to speak with reporters about the trip.

“Vice President Xi’s visit will truly enhance the friendship and it will truly bring more people-to-people exchanges between our two countries,” he said during a news conference in Governor Branstad’s office.

Branstad revealed most of the details of Xi Jingping’s visit earlier this week. He’ll be the guest at an elaborate banquet inside the state capitol next Wednesday night. Branstad plans to invite all 150 legislators, the top judges in Iowa’s court system and some key Iowa business leaders to the event. 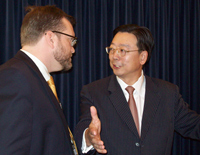 “We hope that he goes away feeling as good about Iowa this time as he did when he came here the first time in 1985,” Governor Branstad said this afternoon.

Xi was a party leader in his province when he led a delegation from China to Iowa as part of a “sister-state”exchange. During that trip, Xi stayed with a family in Muscatine and he plans to reconnect with those folks next Wednesday. The consul general told reporters Xi has fond memories of his visit.

Iowa’s governor has been suggesting there are many ways in which Iowa can benefit, economically, from cementing relationships with the Chinese, from expanding exports of raw ag commodities to extending the retirement plans offered by Des Moines-based Principal Financial into Chinese cities where that country’s aging middle class is searching for options that would provide some sort of financial security beyond their work years.

Governor Branstad on Monday likened Xi’s visit to Iowa as on par with Pope John Paul’s visit to Living History Farms in 1979 and Soviet President Nikita Kruschev to an Iowa farm in 1959.