You are here: Home / Fires/Accidents/Disasters / Marshalltown building destroyed by fire 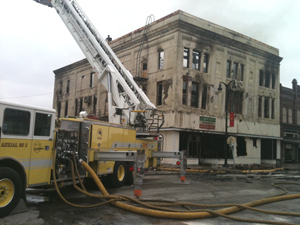 An overnight fire in Marshalltown destroyed a downtown building. Fire Chief Steve Edwards says crews were called to the three-story building at 135 East Main Street in Marshalltown shortly before midnight.

“By the time our trucks got there, we already had flames coming out of the roof,” Edwards said. “So, we set up for a defensive fire attack and brought it under control after about an hour or hour-and-a-half.” The building housed a Hispanic grocery store. No one was injured.

A family living in the back of the building got out safely. The cause of the fire remains under investigation and officials have yet to determine a damage estimate.

“Two-thirds of the roof is gone and half of the wall on the east side is gone, so most likely, it’s going to be a total loss,” Edwards said. A fire wall on one side of the building is credited for helping keep the flames from spreading to nearby businesses.