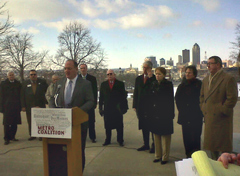 Mayors from Iowa’s 10 largest cities say they “need more, not less” tax revenue to remain the key hubs for jobs in the state.

The newly-formed “Iowa Metropolitan Coalition” touts an Iowa State University study indicating 62 percent of the jobs in Iowa’s 10 largest cities are filled by people who live in adjacent suburban or rural areas.

Waterloo Mayor Buck Clark is among the mayors and other big-city officials who gathered outdoors for a news conference today on the statehouse stops.

“To specifically point out the importance our core cities have on the entire vitality and financial success on whole regions in the state,” Clark said, in explaining the event. “Our cities provide jobs and quality of life to our own residents, but they also fuel the economy of our counties and of our neighboring communities.”

Cities used to get money from bank franchise fees and from property taxes on machinery and equipment, but Cownie said state officials in the past shut down those sources of taxes, too.

“We have an ever shrinking source of revenues,” Cownie said. “I think we have a lot of ideas about what we could do, but certainly the solution for the future of Iowa is not to shrink the revenue sources to the place where this state and job opportunity is growing.”

“Cities oftentimes are on the front lines when it comes job creation,” Corbett said. “We work hand-in-hand individually, and our staffs do, with businesses that are looking to locate and expand in our community.”

According to the analysis from Iowa State University economist David Swenson, 29 percent of Iowans live in the state’s 10 largest cities and those cities generate 39 percent of the state’s gross domestic product.