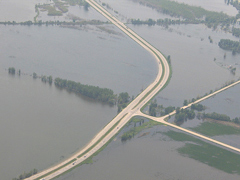 The National Weather Service is changing how it measures the depths of Iowa’s waterways, which also means a change in how much water will be needed to prompt the issuing of flood warnings.

“The reason we’re changing the flood stages and the flood categories across central Iowa is to give our flood warnings more meaning,” Zogg says. “We want to be sure that when we issue a river flood warning for a given location, that it actually means that something is going to occur.”

The National Weather Service office in Johnston serves 51 counties in central Iowa. He says the changes will impact about 30 rivers and streams across that area. “Over the years, due to mitigation activities, locations that may have been affected at a given stage are no longer impacted,” Zogg says.

“That requires us to raise the flood stage and the flood categories.” Almost all of the changes in river forecasting markers are being moved upward, meaning, a warning won’t be issued now until floodwaters reach a higher point.

Zogg anticipates the changes will mean a 50% reduction in the number of flood warnings the office issues this next year, versus previous years. The National Weather Service is scheduled to release its annual flood forecast for Iowa next Thursday, February 16th.

Learn more about the changes at “www.weather.gov/dmx“.