You are here: Home / Health / Medicine / First Lady encourages kids to be healthy 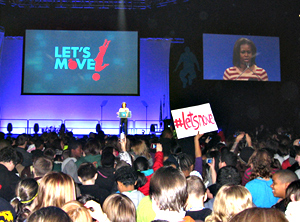 Her stop in Iowa started a four-state swing to celebrate the second anniversary of the launch of her “Let’s Move” initiative.

Mrs. Obama asked for the kids’ help to make Iowa and all of the states the “healthiest they can be.”
Audio First Lady :20

The nearly two-hour long event closed with the First Lady and everyone in the arena performing the Interlude Dance. The Interlude has become a dance craze at the University of Northern Iowa – with fans and students performing the dance during basketball games.