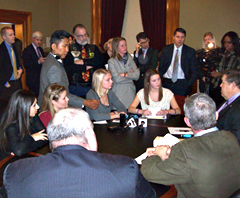 Four eastern Iowa high schoolers grieving the loss of a friend who died in a moped accident last fall are urging state legislators to pass a bill that would require kids under the age of 18 to wear a helmet.

The four made a direct pitch to three senators this morning. Seventeen-year-old Caroline Van Vorrhis, a senior at Iowa City West High School, gave the senators a pamphlet explaining their aims.

“We want to prevent other communities from going through the loss of a loved one that we’ve had to go through the past few months and, after doing some research, we are convinced that a helmet law would save lives,” Van Vorrhis said.

Caroline Found was riding a moped on an Iowa City street at about 9:30 at night this past August when she struck a curb, hit a tree and died from the impact. She was not wearing a helmet. She would have been a senior this year at Iowa City West. Her classmate, 17-year-old Leah Murray, argued a state law requiring helmet use would be more effective than any parental edict.

“As teenagers, we know first hand that our peers don’t always listen to their parents,” Murray said. “No matter how many times your parents tell you to wear a helmet, teenagers would be more likely to do so in order to avoid a smudge on their driving record or a fine than to appease their parents.”

“No one plans to be in an accident,” Lofgren said. “Whether you drive a truck, RV, car or jeep, if you hit a moped driver, not only are they going to want to be protected, but you’re going to hope they have a helmet on.”

“You don’t think that the responsibility lies on you kids to do what’s important for you?” Maxwell asked.

“Teenagers, we can’t always, like, think for ourselves,” Van Voorhis said. “We need the government to do it for us sometimes.”

None of the three senators who made up the initial subcommittee studying the bill supported it, however, killing its chances of becoming law this year. Senator Tom Hancock, a Democrat from Epworth, told the teens not to be too discouraged by the set back.

“I can tell by watching all of you, the expression on your faces and the moisture in your eyes that you really care,” Hancock said.

But Hancock suggested these kinds of mandates aren’t popular with legislators. Murray told reporters she and her friends won’t stop their lobbying campaign.

“They weren’t as open to it as we suspected, but they still left an opening and we’re going to sneak right in there and get this passed,” Murray said. A fourth high school student, from Solon, came to directly lobby legislators but did not testify during today’s subcommittee meeting.