You are here: Home / Education / Nobel Prize winner returns to Iowa State to talk about the experience 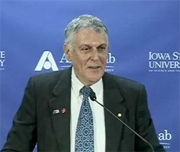 Iowa State professor Dan Shechtman returned to campus today for the first time since winning the 2011 Nobel Prize for chemistry. Shechtman won the prize for his 1982 discovery of what are called quasicrystals.

The discovery of the quasicrystals caused the scientific world to rethink how matter is viewed. Shechtman talked at a news conference in Ames about being in his office at the Israel Institute of Technology and finding out he had won.

He was sitting at his desk working when the phone rang and the person on the line said it was the World Swedish Academy of Sciences with a very important message.

A short time later a colleague came in an confirmed that he had actually won the prize. “They do that because many people think that it is a hoax, and so just to make sure, there is one person who talks to you whom you know,” Shechtman explains. “It’s especially important for American laureates, because it is three o’clock in the morning when they wake them up.”

Shechtman says after the phone call he tried to comprehend how winning the prize would change his life. “What does it mean, what will happen now, and I didn’t even imagine one percent of what was going to happen, I knew vaguely that there would be more activities and talks,” Shechtman says.

He says it was a totally new phase of his life. It has been a whirlwind of attention and speeches since he won the prize. Shechtman talked about flying to Sweden to accept the prize and says when his plane landed he quickly found he did not have to go out the way normal passengers do.

They took him down where they take the suitcases and there was a “very posh” car waiting, and he got in and they took him away. Shechtman compared his own treatment to that of a suitcase as everything was planned for him and he was taken from one event to another without having to worry about making any arrangements. The professor says it was hard going back to class and getting used to scheduling everything for himself again.

Shechtman says he has talked to hundreds of students since winning the Nobel Prize. “My message to them is, if you want to succeed in your career, become an expert in something, be a professional. And I stress that and explain that to them,” Shechtman says.

“Regardless of the age — sometimes I speak to high school students — and I tell them you can start now. Be an expert, if you are an expert, you will succeed in your career, I promise you.” Shechtman has also used his newfound fame to spread a message about the importance of what he calls “technological entrepreneurship.”

He voluntarily teaches a class in Israel that encourages students to open start-up companies, and to keep trying to create something new.

“When you open a start-up you take a risk, and in most cases you will fail. But then, try again. So this is the point,” Shechtman says. He says he will invest in someone who has started and failed because they have experience.

Shechtman says Israelis and Americans are willing to take the risk. But he says in the Far East it is a cultural matter because failure is a disgrace. Shechtman is an Iowa State professor of materials science and engineering, and a research scientist for the Ames Laboratory.

He joined Iowa State and the Ames Laboratory in 2004 and spends about four months a year on campus. Shechtman studies magnesium alloys and teaches students to use transmission electron microscopes.