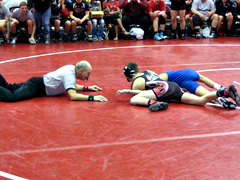 The 3A championship dual will involve Bettendorf and West Des Moines Valley. Bettendorf beat Iowa City West in the semi-finals, avenging their loss to the Trojans in last year’s finals. Davenport Assumption will try to repeat as team champs in class 2A championship.

The Knights will face Manchester West Delaware. And the class 1A championship dual will feature undefeated Underwood against Nashua-Plainfield. The Eagles are a perfect 33-0 in dual meets this season, while the Huskies knocked off Gilbertville Don Bosco, ending the Dons run of appearing in seven consecutive team dual finals.

The championship duals – along with matches involving teams vying for 3rd and 5th place – will begin at 7 p.m.