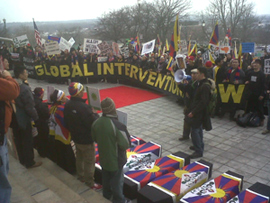 Protesters at the state capitol.

Over 150 people gathered on the statehouse steps this afternoon to protest the Chinese vice president’s visit to Des Moines this evening, chanting phrases like “Shame on China” and “China Lies, Tibetans Die.”

Tenzin Dawa of Madison, Wisconsin, moved to the U.S. a dozen years ago, when she 17 years old. She hopes her presence in Des Moines sends a message.

“That Governor Branstad thinks about Tibet before he makes any deals with Xi Jinping,” she said.

Iowa Governor Terry Branstad has hinted a deal may be signed to boost Iowa soybean exports to China.

A few hundred Iowa business leaders will be inside the statehouse this evening for the banquet Branstad’s throwing to honor the man who is likely to become China’s next president.

The guest list includes all 150 members of Iowa’s legislature, the justices of the Iowa Supreme Court and judges on the Court of Appeals as well as 165 people who are part of the Chinese delegation. 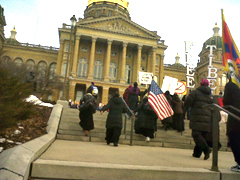