You are here: Home / Fires/Accidents/Disasters / Fire destroys business in Greenfield 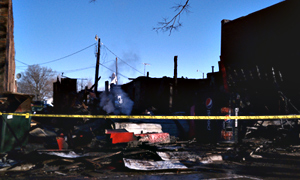 An early morning fire destroyed a tire repair and recycling business in the southwest Iowa town of Greenfield.

Charlie Abell, owner of Charlie’s Tire Plus, said a friend called him at 4 a.m. to report the building was on fire.

Abell, who lives 20 miles away, said he could see the flames on approach about 5 miles east of town.

Firefighters from Greenfield and three area departments were called to the scene.

No one was injured, but Abell said there was a close call. “They got up here and they were going to cut the door open when an LP tank exploded and blew the door out. Thank God there wasn’t anybody up by (the door) though,” Abell said. 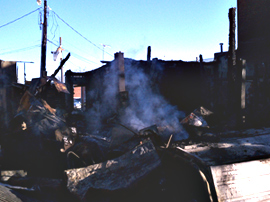 Smoke can be seen from what remains of Charlie's Tire Plus after a fire in Greenfield.

A vacant structure next to Abell’s business sustained some roof and water damage. Abell opened the business last summer.

“I have insurance…of course, it won’t be enough. My entire life savings was in that building,” Abell said. The cause of the fire remains under investigation.