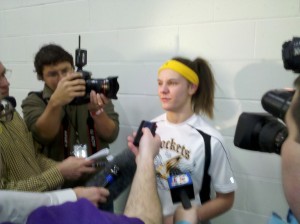 A girl who made history at last year’s Iowa State High School Wrestling Tournament has topped that achievement this year. Megan Black became one of the first two girls to qualify for the tournament in 2011. This year, she became the first girl to win a match at state in a manner other than default.

Black met with reporters Thursday night after beating Jacob Schmit of Don Bosco 10-0 in the opening round. “It’s maybe not the way I wanted to end it, I should’ve gotten out from the bottom,” Black said. “I’m happy…I guess I got a win, but I wish I would’ve finished a little stronger.”

Black, a junior at 106 pounds, is one of seven wrestlers from Eddyville-Blakesburg to qualify for the state tournament. She made it last year at 113 pounds, wrestling for Ottumwa. Black and her younger brother Tucker, who qualified for state at 138, transferred to Eddyville-Blakesburg prior to the season and were forced to sit out 90 school days.

Thursday night’s win boosted Megan’s season record to 10-1. Black said she won’t be satisfied with just one win at state. “I want to be on the medal stand and the higher up, the better,” Black said. She lost both of her matches at the state tournament last year.

Black said she’s not ready to think about her historic accomplishment. “I’m not really thinking about the history part of it yet, I think because I’m not done. I want to go and get some more wins,” Black said. Her next opponent is Underwood’s Taylor Curtis, the 4th-ranked wrestler at 106 pounds in class 1A.

Cassey Herkelman of Cedar Falls became the first girl to advance at state last year when she accepted a default in the opening round. The story made national news as a wrestler from Linn-Mar cited religious reasons for choosing not to wrestle a girl. This season, Herkelman finished third in district competition – falling just short of a return trip to the state meet.