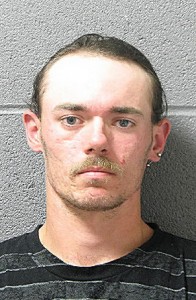 Burke is accused of setting fires that destroyed a downtown Marshalltown building last week and damaged a garage early this morning. Marshalltown Fire Chief Steve Edwards praised everyone involved in the ongoing investigation. “Our people have stepped up to the plate and done a really good job,” Edwards said at a press conference this afternoon. “Our fire marshal has been putting in 12 to 15 hour days. You know, we can’t brag about that or talk about that, but that’s the kind of work that our people are willing to do. They understand their role in the community and we’re limited. That’s why we reached out and asked for some help.”

Federal, state and county agencies have assisted Marshalltown authorities. Three more fires over this past weekend in Marshalltown remain under investigation. Burke is being held in the Marshall County Jail pending an initial court appearance.