You are here: Home / Military / Navy names ships after Sioux City and Omaha 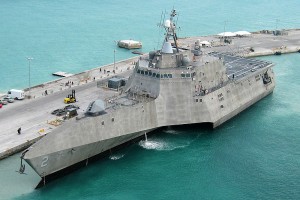 The U.S. Navy has announced that two of its new ships will carry the names of western Iowa cities.

In an interview with Radio Iowa, Navy Secretary Ray Maybus, said the ships will be the U.S.S. Sioux City and the U.S.S. Omaha.

“These are the littoral combat ships, they’re some of our newest types of ships. They’re shallow draft, they’re very fast, and they’re modular — they can take off one weapons system and put on another,” Maybus said.

He said they will buy 55 of the ships over the next few years and the Sioux City will be LCS 11 and the Omaha LCS 12.

There are two types of ships in the L-C-S class. The Sioux City will be built Marinette, Wisconsin as a single hull steel ship. The Omaha will be built in Mobile, Alabama and will be an aluminum tri-moran.

The Sioux City will be 378 feet long and the Omaha will be 419 feet long with both have a top speed over 40 knots. The military is looking at making big cuts in all branches, but Maybus says this ship program will move ahead after some work to lower their cost.

He said when he took over the bids for the ships came in way too high and he decided to have the two builders bid against each other, even though he thought they need two variations of the ships. “And over the course of the next year, the prices came down by almost 40%,” Maybus continued. “So we have 10 ships from each builder locked in at fixed price contracts, it’s one of the best values that we have. We’ll be getting the last of these ships at about 350-million dollars.”

The keels will be laid for the Sioux City and Omaha in 2013 and Maybus says they should be ready to launch in 2016. Each ship will have a crew of around 80 sailors.

You can see more about the littoral combat ship class on the Navy’s website at: www.navy.mil/navydata/fact_display.asp?cid=4200&tid=1650&ct=4> .