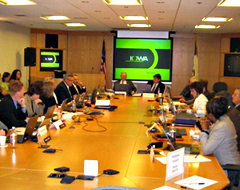 IPEP board meets in Des Moines.

Economic development officials today approved the state’s largest ever capital investment in a business that intends to build a nitrogen fertilizer plant in southeast Iowa.

The Iowa Fertilizer Company will receive a package of incentives that includes nearly $32 million in tax credits and $1.6 million in loans.

Iowa Partnership for Economic Progress Director Debi Durham says there are a couple of reasons for the state to make such a big investment.

“The quality of jobs that are attached to it and the location of it,” Durham told Radio Iowa. “It’s going to a county that does have one of the state’s highest unemployment rates. I think when you look at this, it’s just a win on so many fronts.”

The $1.3 billion dollar plant will be built near the tiny town of Wever in Lee County, which recorded an average unemployment rate of 9.4% last year.

The statewide average was 6%. Durham admits the $32 million in tax credits is relatively large compared to other state supported projects. “The reason for that is because a great deal of their supply or product will be sold within the state of Iowa. That’s why this one tends to be more heavy on the tax credit side than the direct financial investment,” Durham said.

Farmers use nitrogen fertilizer to help grow crops. Construction on the plant could begin in the fall. Officials believe the plant will be operational sometime in 2014 and create 165 jobs. Local incentives for the project are still under negotiation.

Steve Bisenius is executive director of the Lee County Economic Development Group. “It’s such a large project and it certainly has a huge impact on our region,” Bisenius said. “We certainly know that all of Lee County, the surrounding counties and the surrounding states will be very much looking forward to this project.”

Company officials report the product produced in southeast Iowa will replace much of the nitrogen fertilizer currently being imported from other countries. Iowa Fertilizer Company is a subsidiary of Orascom Construction Industries, with headquarters in Cairo, Egypt.