A western Iowa man was desperately searching for a place to eat Saturday afternoon when he finally settled on pizza from a convenience store in Guthrie Center.

While there, Steve Petty bought a Powerball ticket and ended up winning a one-million dollar prize. He had previously stopped at three restaurants – which were all closed.

“If one of those restaurants had been open, I may not have bought a ticket,” Petty said. He claimed his prize today at Iowa Lottery headquarters in Des Moines.

“My 2004 Prius is at the 199,000 mile stage and I’m not sure how much longer it will go, so a new car will come in handy in the near future.” Petty also plans to set aside some money for retirement and fix up his home to help care for his 95-year-old mother. She landed in the hospital last Thursday after taking a bad fall.

Petty said his mother was “minimally responsive” Friday morning, but her condition has since improved. Petty was at the hospital Sunday when he informed his neighbors of his good fortune. 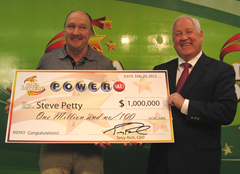 “They came to the hospital and they said ‘have you validated your ticket?’ I said, ‘What does that mean?’ They had me sign my ticket and took me to the convenience store. They put the ticket in the machine…and it was indeed a one-million dollar winning ticket. I was overjoyed,” Petty said.

Petty is an infrequent customer of the Iowa Lottery. “I think this million dollar ticket came on a return of 22 to 28 dollars,” Petty said. After taxes, Petty is collecting $700,000.