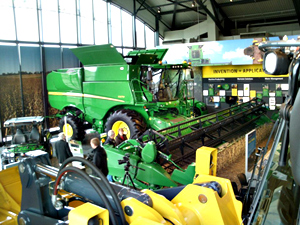 Inside the John Deere Pavilion.

The John Deere Pavilion in Moline re-opened last week with new displays showcasing all the different kinds of equipment the company makes.

Iowa has a long history as a user and maker of Deere equipment. John Deere spokesman Al Higley says familiarity with the green-colored machines is one of things that draws poeple to the pavilion.

“We certainly get a lot of our guests who come from an agriculture and farming background, they know exactly what every one of these pieces of equipment does.

Same thing on the construction side, but we also have a lot of visitors who come in who really don’t know what our equipment does and how it helps our customers and their businesses. So we thought it would that interesting for those visitors to set the machines in their natural environment,” Higley says.

That natural environment includes beans in front of a combine that look real, and a tree that towers to the roof in one of the timber harvesting machines. Higley says they’ve also included some first hand info on the machines. He says most of the equipment displays include a video of a customer who actually uses the equipment to talk about how it helps them.

Not all the equipment is made in the United States. For example, there’s a 50-75-E tractor made in a Deere plant in India.

“It looks in some aspects, a little bit different than a machine of a similar size that they might see here, that particular five-thousand series, as we like to say, is a global platform we make in several different parts of the world and we move it around to wherever it needs to be to assist customers that’re be interested in that size of a tractor,” Higley explains. 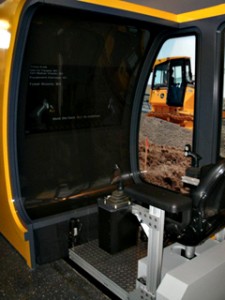 A simulator in the John Deere Pavilion.

Higley and the John Deere Pavilion staff anticipate lots of interest in three new construction equipment simulators now in the facility. They are the same type of simulators that are used to train workers.

One is an excavator with a seat on a platform that moves. “You’re loading a large articulated dump truck, and so if you have a full bucket of material and you’re swinging it over to dump, but you’re not high enough and you hit the truck, you’re going to feel that bump as you do that,” Higley says.

Another simulator is designed for people in wheelchairs, and the third replicates a dozer that uses a blade to move dirt. He says you have to control the speed and the movement of the blade to push the material into a pre-defined area.

The machines give you a score based on how well you complete the tasks. The renovation updated the facility that first opened in 1997. the John Deere Pavilion is open nine a.m. until five p.m. Monday through Friday, 10 a.m. until 5 p.m. on Saturday, and noon until 4 p.m. on Sunday. Admission is free.