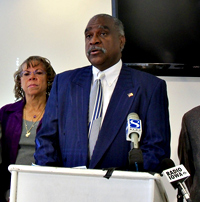 Leaders of the Iowa/Nebraska NAACP say they are happy that the new leader of the Iowa Civil Rights Commission is trying to make changes to how complaints are investigated by the commission, and they will keep monitoring the progress.

NAACP president Keith Ratliff,  says a review of complaints found those that didn’t involve housing  had an average probable cause for investigation rate of just under 2%.

“The Iowa Civils Rights Commission probable cause rate of one-point-five-percent is disturbingly low, and when placed in comparison to neighboring states for which comparable data is available,  is even more disturbing,” Ratliff says.

The NAACP brought their concerns to Civil Rights Commission director Beth Townsend earlier this month, and Ratliff credits her with working to take action. Russell Lovell, a lawyer on the NAACP legal committee, says they’ve seen improvement. “We’ve been advised that already for the current fiscal year that began in July that there is a significant improvement, I think about double the  last year rate, now that’s still low, but none the less, there are changes going on,” Lovell says.

“We’ve been pleased with the meetings we’ve had with director Townsend, that she takes this seriously, that she realizes there’s a need for a very close look and changes to be made.” Lovell says it’s very important for the people who file complaints to be able to have a system that works as the Civil Rights Commission confirms that 80 to 90% of the people who file complaints don’t have a lawyer to represent them.

“And so the investigation done by the Iowa Civil Rights Commission is critical to those people having any reasonable access to justice. And if probably cause is found, the Attorney General’s office will provide representation too,” Lovell explains. Ratliff and Lovell talked about some of the reasons for the low rate of cases that move forward, and Lovell says one is that the definition of “probable cause.”

“To our surprise there is no definition of probable cause in the commission’s rules or the statue. And indeed that seems like that would be foundational to trying to determine what probable cause is certainly,” according to Lovell. “The possibility of uneven and inconsistent application of that of course could exist if you don’t have a defined definition for staff to apply.”

The cases that do get a probably cause designation can take from four to eight years before they get closed. Ratliff says the commission director is also working on that issue. He says director Townsend has stated that they are now trying for a goal of having each case closed 180 days from start to finish.

“And we certainly stand behind and support that as what needs to be done. To go from four, six eight years for a case to close, and moving to down to a standard of 180 days, will certainly be a great improvement when they reach that,” Ratliff says. Townsend was appointed to lead the Civil Rights Commission in January of 2010.

Ratliff and Lovell say they want to continue meeting with her on a periodic basis to ensure that progress is being made.

Governor Branstad talked about the issue today at his weekley meeting with reporters. Branstad story.