You are here: Home / Agriculture / Search is on for Iowa’s best burger 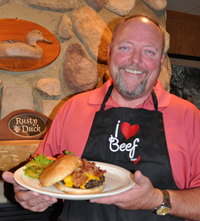 An annual competition is under way to find Iowa’s best burger. Nominations are being accepted in the contest sponsored by the Iowa Cattlemen’s Association and the Iowa Beef Industry Council.

Beef Council spokesperson Michelle Baumhover says although hamburgers are included on most restaurant menus, the top burgers usually feature a unique twist on the all-American classic.

“That is the great thing about a burger – it’s just a blank palette and people can put on the toppings and different condiments that appeal to a wide variety of tastes,” Baumhover said. “We’ve had burgers with peanut butter on them or eggs on them…all kinds of really creative and unique burgers.”

There are only a few contest rules, including all entries must be burgers made from 100% beef.

“Any burger, as long as it’s a patty, can qualify…and it can have any type of condiment or bun. It has to be an Iowa restaurant and it needs to be open at the time of the contest,” Baumhover said. Nominations will be accepted through March 16 and can be submitted through the Iowa Beef Industry Council’s website or Facebook page.

Last year, 275 restaurants were named by roughly 3,500 nominations. Judges narrowed the list to a “top 10” and later selected the Rusty Duck as the winner. This year’s winner will be announced the first week of May to kickoff “Beef Month.”