You are here: Home / Human Interest / Warrior Dash to make its Iowa debut this summer 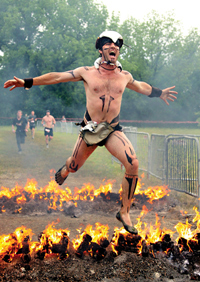 Competitor jumps over fire in a Warrior Dash event.

An extreme sporting event that’s popular in America’s big cities will come to Iowa for the first time this summer. The Warrior Dash is a 5K running race with about a dozen obstacles through which participants navigate.

That includes leaping over pits of fire, climbing vertical walls and crawling through a field of mud over which barbed wire is strung.

Race director Munirah McNeely says they’re called “obstacles from hell” for a reason. “The best thing about the Warrior Dash is it provides a challenge for participants,” McNeely says.

“It’s not meant to be easy but it’s meant to be attainable. As long as you’re willing to challenge yourself, anyone can really do it.” Those who complete the course are rewarded with a Viking-style helmet, complete with fur and horns, in addition to a medal and a t-shirt.

McNeely says there will be dedicated hard-cores at the event who are training and bent upon reaching the finish line first, but most are honestly just hoping to finish. 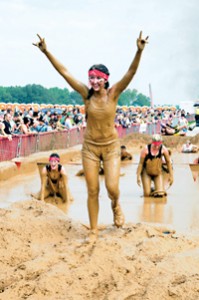 Participants in the Warrior Dash.

“We do have a number of participants who are coming out that are trying to win our awesome Warrior Helmet award, however there is a large demographic that comes out and it’s their first time running a 5K, or they want to do an event with their friends that’s a bit different,” she says.

“It’s about the experience. It’s about challenging yourself.” Waves of runners are sent off at various times throughout the day and there’s a line-up of local bands playing at the outdoor festival for all finishers. McNeely says the competitors come in all shapes and sizes.

“The average age is around 30 but really we have a wide athletic demographic, from triathletes to others who maybe this is their first time running a 5K,” McNeely says. “That’s what makes the event exciting is that there’s going to be a large group of people who are just out there, trying to tackle it on a different level.”

The Warrior Dash will be held July 14th just west of Des Moines, near Earlham. This year, the events will be held in 62 cities around the world. Learn more at: www.warriordash.com.