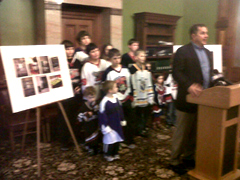 Braley, who is from Waterloo, has a nephew who plays in youth hockey tournaments and Braley says he’s concerned about incidents of carbon monoxide poisoning in ice rinks.

“I’m asking the legislature to look at who’s using these facilities, what type of exposures are acceptable at a maximum level and then provide a minimum response so that every facitily takes into account the health risks of the people who use it,” Braley says.

Only three states — Minnesota, Massachusetts and Rhode Island — have established air quality standards for ice arenas. Braley envisions a law in Iowa that would require ice rinks to have air quality monitoring equipment and alarms that would sound throughout the facility when carbon monoxide levels are approaching a dangerous level.

Braley, a member of the U.S. House of Representatives, says it makes more sense to enact state rather than federal regulations.

“Because this relates to the quality of indoor facilities, it seems that a more appropriate response is from the state which has historically dealt with these public safety issues and building code issues,” Braley says.

Last fall, kids on the Des Moines Junior Bucs hockey team were sickened during a practice and treated for carbon monoxide poisoning, although later tests at the indoor ice rink did not indicate air quality levels were dangerous. Cheryl Thompson of Des Moines has a 12-year-old son on the team who was treated by paramedics on the scene.

“The kids that are really small on his team are the ones that ended up in the hospital,” Thompson says.

Without any state regulations for air quality at indoor ice arenas, Thompson is concerned carbon monoxide levels could again cause problems at the Metro Ice Sports Facility in Urbandale where her son practices.

“And it’s not just hockey players. There are figure skaters who are there,” Thompson says. “I mean, we’re talking a lot of kids, not just hockey players.” That arena and others are often open for public skating as well, plus Congressman Braley says fans in the stands who watch youth hockey tournaments and the elderly people who walk laps at Waterloo’s indoor ice arena need to be assured the air they’re breathing won’t sicken them.

Braley sent the top leaders in the Iowa legislature a letter today, outlining his concerns and he held a news conference at the capitol in Des Moines to discuss the issue with reporters.