You are here: Home / News / Lottery to offer players another shot at the unclaimed Hot Lotto jackpot 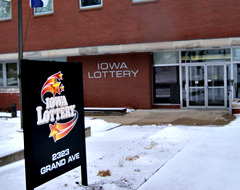 Those who were let down by finding out they didn’t have the recently unclaimed winning multi-million dollar Hot Lotto ticket will get another chance to win some of that money.

A lawyer who claimed he represented the winner of the ticket worth some $14-million turned it in just before the expiration deadline on December 29th, but later gave up the claim after the Iowa Lottery asked for more information.

Now Iowa Lottery spokesperson Mary Neubauer says a portion of that jackpot will be used in a promotion along with the jackpot from another ticket that went unclaimed.

Neubauer says there was an unclaimed Powerball jackpot that also went unclaimed at the end of December in Georgia.

The plan for the unclaimed money is to start a series of promotions in July that run through August. “There’ll be a whole bunch of different prizes in the promotion, but we’re thinking the biggest prize in the promotion will be a million dollars cash,” Neubauer says.

“You know, it’s not very often that we have the opportunity to do something like this. I don’t think any of us can ever remember at time when there were two huge jackpots like this that both went unclaimed at about the same time. So, it really creates a unique opportunity to have some fun and put together something that’s really unique.”

The state has been struggling with budget issues, and some might ask why the lottery doesn’t just hand over the two million dollars to the state. Neubauer says there are specific rules about lottery money.

“Iowa law specifically says that the money from unclaimed lottery prizes will go back to players. And I think it’s a matter of trust,” Neubauer says. “This money was going to players, it’s just that the particular players in these two instances didn’t ever claim the prize.”

She says the state got its cut of the money back when the tickets were sold.

The final details are still being ironed out, but the lottery is looking at an event in August to give out the one-million dollar prize at the Iowa State Fair. Neubauer says they’re talking about a possible “Millionaire at the Fair” event.