You are here: Home / Human Interest / Washington chicken McNugget back on the sale block 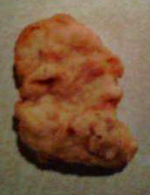 The story of that Chicken McNugget that looks sort of like George Washington has taken an odd turn. A Dakota City, Nebraska, woman found the president-resembling nugget three years ago and popped it in her freezer.

She’d purchased it at a McDonalds in Sioux City, Iowa. Last week, Rebecca Speight put the nugget on eBay to raise money to send kids from her church to camp. The bidding went over $10,000, but then eBay stopped the bidding, saying it was illegal to sell expired food.

Later, officials with the website reconsidered and reversed themselves, as the profile of Washington is considered a high-profile item. It’s re-listed now and bidding is already back over $4,000.