You are here: Home / News / Governor doesn’t agree with proposal to cut the state drug czar 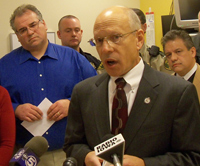 Dale Woolery, acting director of the Office of Drug Control Policy, talks at an event on the dangers of synthetic drugs. (file photo)

Republican presidential candidates and Republicans in the U.S. House want to get rid of President Obama’s so-called “czars” but Iowa’s Republican governor is shooting down the idea of getting rid of the state’s drug czar.

“What they’re talking about at the federal level is these unconfirmed appointees,” Governor Terry Branstad says. Governor Branstad says his drug czar has to get the support of 32 state senators in a confirmation vote in order to hold the job.

“We know we’ve had some real problems here now with these synthetic drugs. You know we had a tragic death that occurred as a result of that,” Branstad says, referring to the Norwalk teenager who committed suicide after taking “synthetic” marijuana product called K-2. “…I think we need to continue to be vigilant and stay on top of that.”

Democrats in the Iowa Senate propose moving the responsibilities of the Governor’s Office of Drug Control Policy to the state Departments of Public Health and Public Safety and getting rid of the “middle manager” who is the state’s drug czar. Branstad is making it clear he opposes the move to end funding for the drug czar and his staff.

“I think the state appropriate is like $290,000. It’s very small,” Branstad says. “…There’s a significant amount of federal dollars that they administer and I know local law enforcement and local organizations that have worked on substance abuse appreciate the support and the help they’ve received from the Office of Drug Control (Policy) and the coordination that goes through that (office).”

And Branstad hints the state might lose some federal money for local drug-fighting efforts if the state’s Office of Drug Control Policy is shut down.