You are here: Home / Crime / Courts / House proposal would hold the line on court system budget 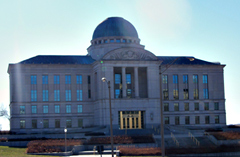 Republicans in the Iowa House have drafted a $154 million budget plan for the state’s court system that Democrats say will lead to layoffs and does nothing to ensure the 33 county clerk of court offices operating on a part-time basis are open full-time.

Representative Gary Worthan, a Republican from Storm Lake, said the G.O.P. plan for the courts provides the same amount of money next year that the courts have been operating with this year.

“This budget does not close anything. It does not cut anything,” Worthan said, using the word “austere” to describe the plan. “…It’s a challenging budget, there’s no doubt about that, but we are not cutting or closing.”

Representative Todd Taylor, a Democrat from Cedar Rapids, said the G.O.P. plan is too austere. “We will have more court closure days,” Taylor said. “We will have more potential layoffs. We will have courtrooms that will have to be closed on the afternoons because we don’t have the funding to keep them going and that will impact Iowans’ access to justice.”

The state’s chief justice has asked legislators to provide $10 million more to the court system in the coming year. While most Republicans in the House voted to provide the courts a “status quo” budget, a handful of House Republicans voted against providing the court any money at all.

Representative Dwayne Alons, a Republican from Hull, objects to the court’s 2009 ruling on gay marriage. “I believe as long as we have four supreme court justices that, in are my view, should be subject to impeachment….I cannot support any money going to the court system,” Alons said during today’s debate. “I believe impeachment should be addressed first.”

The Iowa Supreme Court has seven justices. Three justices who joined the court’s unanimous gay marriage ruling were voted off the court in 2010. Four others who signed off on the ruling, including the justice who authored the opinion, are still on the court.