You are here: Home / Health / Medicine / Vice President asked a variety of questions during stop in Ames 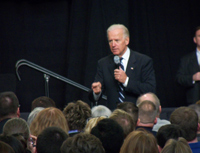 Vice President Joe Biden gave a speech on the manufacturing industry at Iowa State University Thursday, and afterward took questions from the audience a on diverse number of topics.

I.S.U. student Amanda Bush, asked Biden about one of the controversial issues involving the healthcare plan.

“President Obama was quoted in a commencement address at the University Nortre Dame saying ‘Let’s honor the conscience of those who disagree with abortion and draft a sensible conscience clause to make sure that all our health care policies are ground not only in sound science, but also in clear ethics.’ Mr. Vice President, then why did he disregard this statement in the HHS mandate forcing all faith-based agencies and employers to provide contraceptives to their employees for the very thing that violates their conscience?,” Bush said.

Biden says the issue “got screwed up in its first iteration,” but now says what it should. “No Catholic or religious institution, running a large institution.. that is not directly related to the function of the church, the steeple, like hospitals and universities. None will have to pay a single solitary penny for reproductive services, not a single solitary penalty. The conscience clause is being honored in its literal sense,” Biden said.

Biden was also asked about the administration’s stance on funding for NASA by and I.S.U. student who is doing research for the space agency. Biden replied that they are still putting money into research, but not into the manned space program, and admitted that has upset some people.

Another I.S.U. student asked Biden why biodiesal is not being used more. The Vice President said they are spending a lot on developing new green fuels, and he said it is costly because it takes time to ramp those technologies up to be more affordable.

“The country that gets the green the quickest is gonna win the trophy,it’s gonna have the best jobs, the most vibrant economy the greatest growth. That’s where it’s gonna come. But you have to invest in the front end,” Biden said. “And by the way, you’re going to invest and there’s going to be mistakes. Not every one of the new technologies is going to break through.”

Some 700 people, including several students attended Biden’s speech in Howe Hall. Iowa State freshman, Jennifer Feeland of Alburnett says it was an honor to see one of the country’s top leaders.

“I thought it was great that he got to come to campus and I got to hear his speech,” Freeland said. She said the message was a positive one that’s needed.

“I probably don’t know as much about the economy as I should, but I thought it was really encouraging, to hear him say that, even though I don’t agree with everything he says, I thought it was a good message for America to hear so that they know that there is hope in the future and that the economy is getting back on its feet again,” according to Freeland.

Fellow student, Megan Kleckler is from Illinois and had a similar take on the speech. “Well I thought it was very interesting, there were some things that were very exciting that I agreed with, and there were some things I did not,” Klecker said. “It was again like Jennifer said, an honor just to be here, so it was a good opportunity.”

Biden took a tour to view student research projects before making his speech.