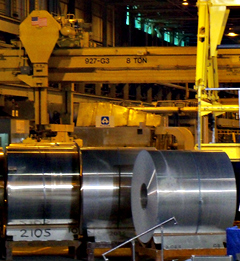 Aluminum rolls at the Alcoa plant.

As automakers strive to make more fuel-efficient cars, Alcoa is breaking ground in Davenport today on a $300-million expansion project to produce a lighter-weight automotive aluminum.

Alcoa spokesman John Riches says the expansion will include new construction as well as renovation of current facilities with new equipment.

“We already produce some material for automakers but we’re seeing a significant increase in the demand for aluminum in the automotive market,” Riches says.

“A lot of that is really being driven by the federal CAFE (corporate average fuel economy) standards that require automakers to increase the mileage that their vehicle fleets get.”

The average car now contains 343 pounds of aluminum. Riches says by 2025, that average should have gradually increased to 550 pounds.

“The materials we make here would go into the structural panels,” he says. “That would be doors, the hoods, the trunks, the roof of a vehicle, those kinds of panels would be made with the materials we produce here.”

The project will create 150 temporary construction jobs as well as 150 permanent jobs at Alcoa once production begins. Alcoa currently employs 2,200 workers at its Davenport works. Governor Branstad is expected to be among the dignitaries at the facility for the 2:30 PM groundbreaking.

Riches says the demand for the company’s aluminum automotive products is expected to double by the end of 2013. “We have existing relationships with quite a few automakers,” he says. “This project is really being driven by one customer but we’ve not announced who that is yet.”

That name won’t be revealed, he says, until that customer is ready to make itself public. All of the construction and new equipment should be in place by mid-2013 with production of the new aluminum ramping up to full capacity early in 2014.

The Iowa Economic Development Board voted back in September to award Alcoa an incentive package that includes $3-million  in direct financial assistance.