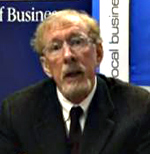 The monthly survey of business leaders and supply managers in Iowa and eight other Midwestern states points to improving growth for the region over the next three to six months.

Creighton University economist Ernie Goss says growth that was initially limited to the agriculture and energy sectors has now spread to most other industries.

“This is the second month in a row we’ve seen new jobs being added,” Goss says. “We asked the supply managers about layoffs. Even now, they still expect layoffs to be a bit higher than I think they’re going to be. The real key is going to be what happens to oil prices, what happens to energy prices in the months ahead.” Inflation rates are becoming “excessive,” Goss says, and he predicts it will force the Federal Reserve Board to raise interest rates before 2012 is over.

“They’ve promised all of us, they’ve pledged, cross their heart and hope to die, that they won’t raise interest rates until the end of 2014,” Goss says. “I don’t see it. The price pressures that we’re recording are just much too strong and those are much like what we’re seeing across the nation. Too much inflation. The Fed’s going to have to raise rates.”

Gasoline prices are climbing in Iowa and nationwide. Some analysts forecast the Midwest will see gas selling at four-dollars a gallon before Memorial Day. In 2008, petroleum costs topped out at $147 a barrel and Goss says if we again approach that level, we’ll see an economic slowdown.

“If we see oil prices above $120 to $130 a barrel, that’s going to put a real dent in the growth and I will be much less positive about the Mid-American economy going forward,” Goss says. “Right now, what we’re seeing in terms of oil prices are not enough to really slow this economy down.” Since the beginning of the recession, Iowa has lost about 22,000 manufacturing jobs, or more than nine-percent of those jobs.

Goss says the Creighton surveys over the past several months indicate manufacturers in the state will increase hiring in the months ahead.