You are here: Home / News / Group says not enough is being spent to clean up waterways 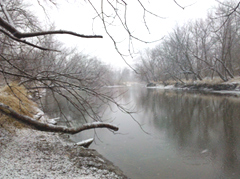 An eastern Iowa based research group has issued a report which is critical of state lawmakers’ efforts to clean up Iowa’s lakes and rivers.

The Iowa Policy Project (IPP) study shows funding has declined to seven of the 10 state-managed water protection programs over the course of a decade.

IPP research associate Will Hoyer reviewed water quality funding trends, adjusting for inflation, dating back to 2002. “When we do that, we see decreases…near 30%,” Hoyer said.

“We feel like that’s a problem.” IPP Executive Director David Osterberg, said state water quality staff are being asked to do more with less and asking for improved results is asking too much.

“At least $5-million more should be being spent on water quality in the state of Iowa just to be at the level we’ve been at in the last 10 years. And that’s without considering the intensification of row crop agriculture,” Osterberg said.

Hoyer noted that lawmakers’ choices appear to contradict what Iowa voters asked for in November 2010, when they approved a natural resources trust fund to be funded by a share of the next increase in the sales tax. Osterberg believes that vote showed the public would support increases in funding for water protection.

“We just don’t spend much money on natural resources, which sustains this whole state,” Osterberg said. “We depend, in Iowa, on our natural resources and yet we don’t spend very much money protecting them.” Iowa has more than 550 streams, rivers and lakes listed as “impaired waterways” by the Iowa Department of Natural Resources.