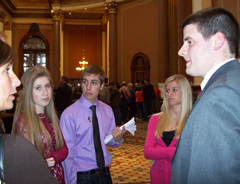 Senator Chuck Grassley's granddaughter, Shirley Speckerman, on left, in red, his grandson Representative Pat Grassley is on the right, in gray jacket

Senator Chuck Grassley’s granddaughter attends a northeast Iowa school that’s been targeted for closure and she’s at the statehouse today, lobbying for a reprieve.

The University of Northern Iowa’s president announced two weeks ago that the K-12 “Malcolm Price Lab School” on campus would shut down June 30. The board that governs the university approved the decision last Monday. Grassley’s grandchild, 17-year-old Shirley Speckerman, is a junior at the school.

“President Allen came to our school and basically said I’m recommending to the Board of Regents that your school be closed and he wasn’t prepared at this meeting in the slightest,” Speckerman said during an interview in the statehouse press room. “He wasn’t prepared to answer any of our questions. His reasoning wasn’t clear. He didn’t have a plan set up for the future at this point, because we asked him what it was and he dodged every question.”

Speckerman contends that the school’s closure damages the university’s reputation as a national leader in teacher education.

“The last place they should be making cuts are at the Lab School where those future teachers get their training,” she said.

Sixteen-year-old Margaret Creeden of Cedar Falls has been enrolled at the Price Lab School since she was in preschool and can’t imagine graduating from another high school.

“A financial crisis doesn’t happen overnight,” Thompson said. “We want to know why UNI didn’t tell us about this earlier and why UNI is willing to give up its core mission — that is to create the teachers of tomorrow, and that only happens at Price Lab.”

Another one of Senator Grassley’s grandchildren — State Representative Pat Grassley — is one of the three legislators who’ve asked the state’s attorney general if the university’s president and the Board of Regents have the authority to make the decision. Bruce Rastetter, the president pro tem of the Board of Regents, points out those three legislators are among the Republicans in the House who’ve proposed deep cuts for UNI.

“They’re actually proposing a $30 million cut in the Regents spending,” Rastetter said during an interview with Radio Iowa. “At the same time they’re telling us we can’t make the cuts at UNI and my perspective would be is they can’t have it both ways.”

The three state-supported universities have seen state support decline over the past several years. The UNI budget cuts including ending some academic programs and closing a museum on campus as well as the closure of the Price Lab School.

“We’re making hard decisions as Regents, decisions that aren’t very much fun to make and certainly we’re concerned about funding,” Rastetter said, “so I would hope if they have these questions about the school and the ability to close it, they also would support a positive number in the Regents funding.”

Rastetter argues the Board of Regents has “full authority” close the Price Lab School and he is expressing public support for University President Ben Allen, who Rastetter says is making “hard” but “strategic” decisions.