You are here: Home / Education / One of Iowa’s 150 legislators is a “Lab School” grad, hoping to keep school open 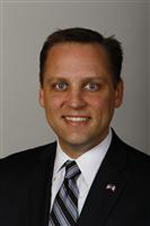 Controversy continues over the decision to close the K-12 laboratory school at the University of Northern Iowa that has been a research center for professors and college students who want to become teachers.

The UNI faculty issued a vote of “no-confidence” in the university’s president late Friday. There’s an online petition drive and a “Keep Price Lab Open” Facebook page. Representative Chris Hagenow, a Republican from Windsor Heights, is a “friend” of the effort.

“It’s not just a Cedar Falls/UNI issue,” Hagenow says. “There’s a lot of teachers across the state who’ve been through there. It’s touched a lot of people across the state. We’ll see if that has an impact. I don’t think the final chapter’s been written for the Lab School yet.”

Hagenow, an attorney who got his law degree from the University of Iowa, is also a Cedar Falls native and a 1990 graduate of Northern University High School — the Price Lab School.

“I went through K-12 there. My sister went there. My aunt and uncle and my dad all went there,” Hagenow says. “So from the time the building opened in 1956 ’til my sister graudated, (the Hagenow family) always had somebody there.”

Hagenow says as a student during the lean budget years of the 1980s, he always heard rumors the Lab School was in danger of closing, but the recent decision to shutter the school seems both disappointing and shocking to him. “I’m a little bit curious as to why that happened so fast,” Hagenow says.

Two weeks ago the president of the University of Northern Iowa recommended that the school be closed on June 30 and last Monday the board the governs the university voted to approve the shut down. Last week Hagenow and two other Republican legislators asked the state attorney general if the legislature needs to vote on the closure. Hagenow says he believes state law requires UNI to have a “lab school” to conduct research.

And he’s not convinced the school needs $30 million in renovations to stay open. “I refuse to believe that we need $30 million to keep the building up,” Hagenow says. “I know what we’ve spent on other state facilities to get them operational. It’s always been much, much less than that.”

Hagenow empathizes with the 366 students enrolled in the school today. “I’ve gotten emails from families who just enrolled their children for the next school year and the teaching faculty is apparentlly not on board with the decision either, so they’re a bit frustrated,” Hagenow says. “It’s a tough deal if you’ve got a vested interest in that right now.”

Hagenow is gauging interest among his colleagues to find out if there’s a way to get the legislature to vote to keep Price Lab School open. Hagenow isn’t convinced by what he’s heard from the university’s president about the school’s closure.

“If there’s a clear vision of how this is going to be better for the university and for the education of students and for the kids (at Price Lab School), then I’ll listen to that,” Hagenow says. “But I haven’t seen that yet.”

Other famous “Price Lab” grads include actress Annabeth Gish, one of the stars of the “West Wing” TV series and Gary Kroeger, who was a part of the Saturday Night Live cast in the early ’80s.

In an odd twist, the University of Northern Iowa’s website for the school makes no mention of the impending closure, but features a video of UNI student-teachers talking about the school’s attributes.

In the announcements section of the webpage, there’s no mention of the closure either, but there is an advisory that today is the deadline for ordering Price Lab School t-shirts.