You are here: Home / Fires/Accidents/Disasters / Smoke from fire contributes to multi-vehicle Highway 20 accident 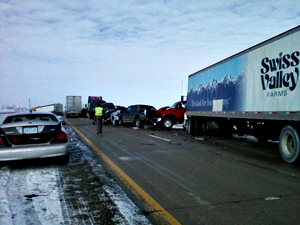 Smoke from a “controlled burn” is at least partially to blame for a multi-vehicle pile-up on Highway 20 in north-central Iowa this morning. It happened just before 8 a.m. east of Webster City.

Iowa State Patrol Trooper Kelly Haman says a farmer was burning some brush and the smoke drifted across the roadway.

“Because of the heavy skies, the fog and the very thick air this morning – the smoke from that (fire) blew this direction across Highway 20. It created a zero visibility situation for people who just drove in to it suddenly…a lot of people naturally hit the brakes and it caused a multi-vehicle crash,” Haman said.

Haman said several people have serious injuries, but there are no reports yet of any fatalities. Slick roads from snow are blamed for other accidents in eastern Iowa.

In Cedar Rapids, police officers responded to 49 crashes between 3 p.m. Sunday and 8 a.m. today. Four police squad cars were damaged when they were hit by other motorists. One police officer sustained minor injuries.

In each case, the police vehicle was hit while parked on the side of the roadway as officers investigated a previous crash.