You are here: Home / Human Interest / Erasing the “R” word from state laws 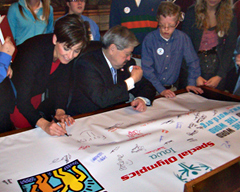 The Iowa legislature has passed a bill that calls for erasing the “R” word from all state laws. Any reference to “mental retardation” will be replaced with the phrase “an intellectual disability.”

“There’s people from the age of seven to the age of 70 who use the ‘R’ word,” says Laura Holms, state director of Iowa’s Best Buddies program, ‘and they don’t understand that it’s a hurtful and demeaning word.”

Last week the bill passed the Senate by unanimous vote and it cleared the House this morning on a 96-to-zero vote. The governor has promised to sign it into law.

“Iowa is a leader in a lot of things and I think it’s really exciting that our state government is removing the ‘R’ word from all of our legislation,” Holms says. “In fact, when I speak to my colleagues across the country, we get all kinds of cheers and, ‘Go Iowa!’ and it’s really an exciting opportunity for our state.”

Governor Branstad held a ceremony in his office this morning to sign a proclamation saluting the “Spread the Word to End the Word” campaign. Holms says the campaign started about four years ago.

“It was started by young people. When there’s youth behind anything, I think there’s more excitement,” Holms says. “I think that by learning from our young leaders in Best Buddies and Special Olympics, hopefully that word will be removed from our everyday language.”

Holms is handing out stickers at the statehouse today to people who have signed the pledge to quit using the “R” word.

“We encourage everyone to visit…http://www.r-word.org/,” she says. “They can take the pledge online. They can learn more about the campaign.”

Governor Branstad is weaing one of the stickers on his lapel. Those like Branstad who sign the pledge express support for eliminating the “derogatory use of the R-word from everyday speech.” They also express support for “the acceptance and inclusion of people with intellectual disabilities.”