You are here: Home / Health / Medicine / American Cancer Society to sign up Iowans for new study 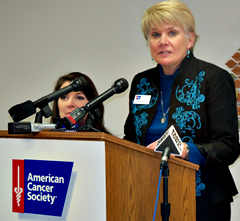 The American Cancer Society is looking to sign up Iowans to be a part of its third cancer prevention study (CPS-3).

Cancer Society spokesperson, Liddy Hora, made the announcement Tuesday that they will start by signing up people in Des Moines and surrounding communities.

“CPS-3 is a major public health study organized by the American Cancer Society…aimed at better understanding the factors, lifestyle, environment, genetics that cause or prevent cancer,” Hora says.

The ultimate goal of the study is to find ways to eliminate cancer as a major health concern for future generations.

Dr. Richard Demming is the medical director of the cancer center at Mercy Medical Center in Des Moines. Demming says the first two Cancer Society studies led to a lot of information on the disease.

Hora says they hope to learn even more in the new study. “The goal of CPS-3 is to enroll 300,000 adults and 2,600 in Iowa from various racial backgrounds, and the participants will then be followed for the next 20-years,” according to Hora. Participants cannot have already been diagnosed with cancer, will be required to fill out a questionnaire, and give a blood sample.

“They’ve got to be 30 to 65 (years old), now we do have a six month window, so if you have someone who comes in and says ‘I’m gonna be 30 in six months’, that’s just fine, we will allow that,” Hora says. She says you also have to be willing to commit to 20 to 30 years of involvement in the study.

Hora says they are rolling it out first in the Des Moines area, and are partnering with local hospitals to hold sign up events. The goal is to get 1,000 people to sign up in the first roll out.

“And so they are watching us…and I think they are going to be amazed with the success that we have, especially with the collaboration that we have going on. And what we hope to do is to continue to model and roll this out into other areas throughout Iowa,” Hora says. Hora says those other roll outs will come in October.

There’s a community kickoff in Des Moines at the American Cancer Society office on March 15th. The other sign up events in Des Moines begin on April 17th. For more information on how to get involved in CPS-3, go on-line to : www.Cancer,org or call toll free at 888-604-5888.