You are here: Home / Crime / Courts / Man who shot in self-defense now “cause celebre” at statehouse 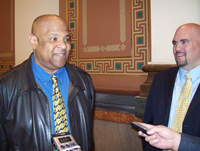 A man who’s now at the center of the legislature’s debate over gun laws spent 112 days in jail before he was found “not guilty” of defending himself after two men chased him down in West Des Moines.

Forty-nine-year-old Jay Rodney Lewis, an ex-cop, shot one of the men threatening to attack him.

“I’ve become something of a cause celebre here in Iowa and it feels really strange. I mean, I’m just an ordinary guy,” Lewis said during an interview with Radio Iowa.

“I got caught up in a very unfortunate situation and I went through hell…but in the end — when everything mattered — everything turned out right.”

Senator Kent Sorenson, a Republican from Indianola, said the 911 tape shows Lewis did everything he could to avoid a confrontation.

“He is a victim, unjustly,” Sorenson said Tuesday during remarks on the Senate floor. “…He was just defending himself against two racist thugs that were attacking him.”

Lewis, a native of Kansas, is black. Because of his time in jail, Lewis lost his job and his home. Lewis lost all his worldly possessions, too, because apartment managers piled his belongings out on the curb for passersby to sift through and take away.

“You know, trying to keep things in perspective, I’m still trying to rebuild my life and it’s very difficult, but it’ll soon turn out all right,” Lewis said. “I’m pretty sure.”

After his release from jail, Lewis spent two nights sleeping in a car before a Des Moines church became aware of his situation and rented him a hotel room. Wearing donates clothes, Lewis made his way to the Iowa Senate Tuesday as Senator Sorenson cited the case as a reason for the Senate to take up a bill that cleared the House last week — legislation that would give Iowans the right to use “reasonable force” to stop a crime in a public place.

“This is a real person that is dealing with an issue now and the after-effects of that,” Sorenson said. “He just did his God-given right of defending himself. We need to take action.”

Lewis supports the bill that would allow people to use “reasonable force” to stop a crime in public. Current law — which stipulates that Iowans are to first try to get away from danger — isn’t always workable, according to Lewis.

All 24 Republicans in the Senate have signed a document called a “discharge petition” in an effort to make the bill eligible for debate, but the ultimate decision about which bills are debated is made by Senate Democratic Leader Mike Gronstal. Senator Sorenson’s not optimistic about the chances for this bill.

“We have Senator Gronstal, who I believe is basically a dictator in the senate and some people may laugh at that, but I believe it’s true,” Sorenson told reporters. “…That’s because Senator Gronstal decides to do what he’s so good at and that’s Gron-stalling.”

Gronstal said he is “not inclined” to respond to that charge. Gronstal also says he’s not going to talk about “hypotheticals” regarding the gun bill either.