You are here: Home / News / Senator’s idea: jackets with contributors’ names sewn on the sleeves 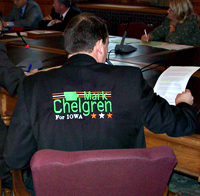 A state senator raised eyebrows this week with his attire.

The senate has a dress code for men, requiring a jacket and tie. This past Wednesday Senator Mark Chelgren of Ottumwa wore a traditional dark suit, but the jacket had his name embroidered on the back, in neon green.

Chelgren’s confident his fashion statement fell within the Senate’s guidelines.

“My tie matches,” he said during an interview, laughing.

Three stars and an outline of the state of Iowa were clearly visible on the back of the senator’s jacket, along with the words “Mark Chelgren for Iowa” in large letters. He’d like to wear the jacket every day.

It would be a bit like a race car driver’s jacket, decorated with the names and logos of sponsors. Chelgren first wore his own suped-up suit jacket in 2010, when he was running for the senate.

“Didn’t really wear a suit much. I owned a suit — as a matter of fact this is the suit I owned — but I hadn’t worn it in multiple years and finally I was told I needed to do a forum and I had to wear a suit and a tie and when so I didn’t worry about it because I knew I had a nice suit and when I went to the closet and pulled the suit, there were moth holes in the back of the suit and I didn’t have another suit made and done correctly, so I went to my embroider and asked if they could put my name, embroidered, on the back of the suit, just so I could cover up the moth holes,” Chelgren said, with a laugh, “because I didn’t want to show up with a bunch of holes in my suit.”

Chelgren intentionally wore the suit coat Wednesday because he was part of a committee considering legislation that dealt with the Iowa Ethics and Campaign Disclosure Board. Last year, after he won his seat in the senate, Chelgren began using campaign funds to pay for dry cleaning his suits.

“Then I was informed that I wasn’t supposed to, so we immediately withdrew that and then I noticed that after I had submitted my request for withdrawal somebody said, ‘Oh, look at what we found,'” Chelgren said. “I kind of laughed because I had said, ‘You know what? I told you.'”

This past Wednesday was the first time Chelgren wore his jacket with the stitched-on campaign bumper sticker on the state senate floor. Last year Chelgren caused a bit of a stir by wearing a kilt with a suit jacket during the legislature’s observance of St. Patrick’s Day.