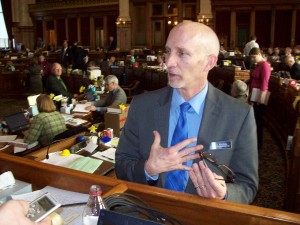 A bid to ban traffic enforcement cameras has been shelved at the statehouse.

Representative Walt Rogers has been the main proponent of the ban.

“For me, it’s always been about the liberty and protecting that and I still go back to our flag and our (state) motto: ‘Our liberties we prize and our rights we will maintain,'” Rogers told reporters late this afternoon. “And I think this is the body that does that.”

However, Rogers couldn’t line up the 51 “yes” votes necessary to get the bill passed through the House this week. Friday is the deadline for getting policy bills like this traffic camera ban endorsed by the House and then passed in a senate committee.

Rogers is from Waterloo — and neither Waterloo nor Cedar Falls have traffic cameras to ticket red light runners or speeders.

“One of the reasons I took this up is because I had many constituents back there say they didn’t want to get ’em,” Rogers said, “so that’s when I started lokoing into it.”

Last year a majority of House members voted to set limits on the fines motorists can be issued for traffic violations in Iowa that’re caught on camera, but the proposal didn’t win approval in the Iowa Senate. This year, Rogers decided to abandon that sort of a compromise and push for an outright ban on the cameras.

“The cameras were the issue that I was concerned about as far as going down this road of a camera-surveillance culture,” Rogers said, “and tickets that aren’t issued by officers, which I think they should be.”

Rogers had planned to bring the bill up for House debate this evening, but learned earlier this afternoon that House Democrats intended to vote against the bill, meaning the bill would have had to pass entirely with Republican support alone.