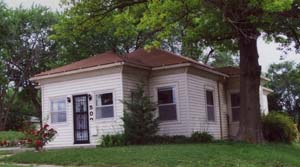 Work is set to begin this summer on restoring a home in southwest Iowa where a late night television icon was born.

Johnny Carson was born in Corning, Iowa on October 23, 1925 and lived in a small home there for three years before his family settled in Norfolk, Nebraska.

The home in Corning is getting a makeover so it appears as it did in 1925. Beth Waddle is with the Johnny Carson Birthplace Society in Corning. “When we received the home, many alterations had been made on the property from its original style and setting back in 1925 when (Carson) was born there,” Waddle said. “So, we worked with a historical architect who has developed a plan for restoring it back to that 1925 appearance.”

The home will also include memorabilia from Carson’s life and career. Waddle believes it can become a much bigger tourist attraction. “TV Land and Entertainment Weekly did a poll several years ago and Johnny Carson was named the number one TV icon,” Waddle said.

The project to restore Carson’s birthplace home carries a price tag of $139,000. Waddle said her organization has raised private and public funds totaling $118,000. The Vision Iowa Board on Wednesday awarded a state grant to cover the remaining $21,000.

Waddle said she’d like to partner with other nearby attractions to bring more visitors to Corning. She mentioned the John Wayne birthplace home in Winterset and Glen Miller’s birthplace in Clarinda as examples.

A Johnny Carson Gallery is located in a museum in Norfolk, Nebraska – where Carson grew up and graduated from high school. Johnny Carson, who hosted the Tonight Show for 30 years, died in January 2005 at the age of 79.