An Ottumwa man who won a $1-million Powerball  jackpot in July turned the ticket in Wednesday at Iowa Lottery headquarters in Des Moines.

Jack Miletich learned he had won the big prize when he checked his ticket two days after the July 23rd drawing.

“I just kind of set back and I said, God this is easy, this is too simple,” according to Miletich. It has been almost eight months since learned he won, and Miletich says he waited to cash in the ticket because he had some legal issues he wanted to take care of first.

The wait led to some anxious moments in trying to keep track of his ticket. “I just kind of had it setting around in a couple of places, it got misplaced a couple of times. Then I figured I probably better put it in my gun safe, maybe that was a little better place,” Miletich says. 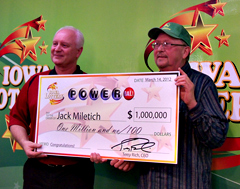 He says his step-grandson liked to play with his tickets and that was one of the times when it got misplaced before he put it out of reach.

Miletich plans to pay off some bills and help his three kids and stepdaughter pay off their student loans.

And he also may retire for a second time. He retired after 30 years at the John Deere Ottumwa works in 2003. “I bought a dump truck and started a small business…I turned 62, so I think I’m gonna probably think about retiring now,” Miletich explains.

Miletich will take home $700,000 after taxes. He had matched all five of the regular numbers, but missed the Powerball. Miletich had paid an extra dollar for the multiplier, which bumped his $200,000 ticket to one million.

Iowa Lottery spokesman, Larry Loss, says Miletich’s win came before the Powerball changed it’s rules. “With the recent change in Powerball, now the match-five prize is automatically a million dollars. And if you do pay the extra dollar, then you would win two million dollars today with the multiplier,” Loss says. Miletich bought his ticket at an Ottumwa convenience store.