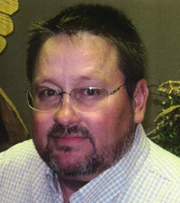 A man who started helping out in his dad’s machine shop at age nine has run the company himself nearly three decades and is being named the Iowa Small Business Person of the Year. Tim Greene owns Quality Machine of Iowa, based in the southwest Iowa town of Audubon.

The 52-year-old Greene says winning the top state award from the U.S. Small Business Administration is a true honor and a tribute to all of his co-workers. “You don’t win these awards by yourself,” Greene says. “We always had good people around us that helped this all happen.”

Greene’s father launched the business doing precision machining of metal parts in Minnesota in 1968 and died suddenly in 1984. Greene had already worked in the shop most of his life and became the business’ owner at age 25. When zoning laws in Minneapolis kept the company from expanding in the mid-1990s, Greene looked to southwest Iowa.

He opened a facility in Denison and later settled in Audubon, where Quality Machine now employs 55 people. Over the decades, Greene says advances in computers and robotics have helped the company stay competitive.

“The constant pressure from the Chinas and the Indias that have taken parts from us over the last 20 years has been the real driver for us to push for this automated machinery,” Greene says, “stuff that allows us to let the machines run through breaks and lunches where before we used to have to be there to run them every minute of the day.”

He offers advice about succeeding to the owners of other companies in Iowa. “They don’t need to hire the best man, they just need people that care and can comprehend what you’ve been taught and then we learn together,” Greene says. “That’s kind of been our motto. When I hire someone new, I always tell them you never have to know everything, but once we learn something, we don’t want to forget about it.”

The company machines parts for clients in a host of industries — ranging from agricultural to automotive and from medical to military.

“I’ve never really said that we wanted to be the largest, we just wanted to be the most efficient at whatever size we are,” Greene says. “With the diverse customer base that we have, we’re sure hoping for good, substantial growth over the next ten to 20 years.”

As the 2012 Iowa Small Business Person of the Year, Greene will represent Iowa at National Small Business Week ceremonies in Washington, D.C., in May, where he will compete for the National Award.