You are here: Home / Education / Kadyn’s Law signed by the governor to enhance safety of school buses 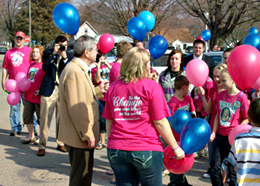 Kadyn’s Law is now officially on the books as Governor Terrry Branstad signed the school bus safety measure during a ceremony at Northwood-Kensett Elementary School this morning.

It’s the school 7-year-old Kadyn Halverson of Kensett attended before being killed last May when she tried to cross the road to get on a school bus and was hit by a vehicle driven by 32-year-old Aaron Gunderson of Northwood.

After Kadyn’s death, her mother Kari and other family members and close friends launched a lobbying campaign to urge legislators to make the penalties for passing a stopped school bus tougher and to address other safety concerns about buses and the students who ride them to school.

Governor Branstad met with some of Kadyn’s classmates prior to this morning’s ceremony held in the school’s gymnasium. Branstad praised the efforts of Kadyn’s family and friends to get the bill before the legislature and passed. “We were very impressed with how well organized they were, and how committed they were to really getting a change made in the law. And really taking this terrible tragedy and trying to make something good out of it,” the governor said. 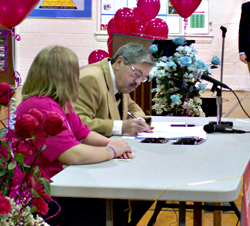 The Iowa Senate and House both passed the bill without a no vote. Branstad thanked the north-central Iowa legislative delegation for shepherding the bill through the statehouse also commended the public for their support of the bill.

“I think it’s a tribute to Kadyn’s family, friends and the whole community of Northwood, and I guess I could even say North Iowa, for getting so strongly behind this legislation,” Branstad said.

“This community has gone through a lot, but your actions and your efforts on this is something that’s going to make a difference for the safety of many school children for years and years to come.” Branstad talked about the provisions of the law.

“It will improve the safety for our children through a combination of increased penalties, increased public awareness and education programs about the importance of safety and stopping for school buses. And also to look additional things we can do administratively to speed up the revocations and things like that that occur. And just generally improving safety for all our children,” Branstad said.

Fines under the new law for a first offense would increase to between $250 to $675 and a person could be sent up to jail for 30 days. A second offense within five years would be a serious misdemeanor punishable by a fine of up to $1,875 and a year in jail.

A driver who causes an injury or death as a result of failing to obey school bus warnings could also be fined an additional $500 to $1,000 and have their license suspended for 90 to180 days. The bill would also require the installation of cameras in all school buses so there’s a video record of those violations, as well as have the Departments of Public Safety, Transportation and Education to do a joint study on school bus safety and look at the feasibility of having children picked up and dropped off so they don’t have to cross streets.