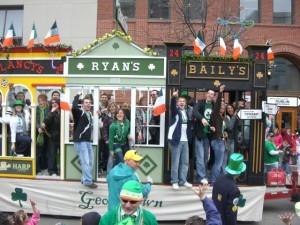 Today’s the day when most everyone claims to be at least a little Irish.

Saint Patrick’s Day parades are getting underway in several Iowa cities, the largest ones being in Des Moines, the Quad Cities and Emmetsburg.

The pre-parade is a time for folks to see and mingle with the various dignitaries, including several people from Ireland, Governor Terry Branstad, a number of Iowa legislators and this year’s Grand Marshal Edmund Nelson.

Hoffman says the parade begins at 1:30 and there are all sorts of other events, including: the ‘Round The Loch Scholarship Run, a pedal tractor pull, a cooking contest, a talent show and the Miss Shamrock Pageant.

There’s also the “gathering of the clans” at the fire station, with food, drinks, dancing and music.

A member of the Irish National Senate, Maurice Cummins, and his wife, Anne, are special guests in Emmetsburg for the three-day festival.

Hoffman says Senator Cummins has made a host of appearances, including meeting with local elementary school students.

Kids always ask silly things of the Irish visitors, like do they have Lucky Charms in Ireland or are leprechuans for real.

This weekend marks the 50th anniversary of Emmetsburg and Dublin, Ireland, as “sister cities.”

Learn more about the Emmetsburg celebration at: www.emmetsburgirishgifts.com.

Also, the country’s only bi-state parade begins at 11:30 AM in Rock Island, Illinois, and crosses the Centennial Bridge into Davenport, Iowa.