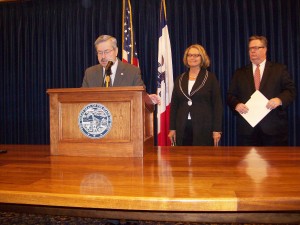 Mary Vermeer Andringa, president and CEO of Vermeer Manufacturing in Pella, is the current chair of the National Association of Manufacturers’ board of directors.

“One of the top priorities that manufacturers have across the country is finding a skilled workforce,” Andringa said. “Five percent of all manufacturing jobs right now are going unfilled, mostly due to lack of finding the right skills in the people that are applying for jobs.”

According to Andringa, it’s no different at Vermeer where over 100 jobs are unfilled.

“Mostly welders, engineers, painters, assemblers, machinists and, in many cases, it’s taking us two-to-four months to find the right people with the right skills,” Andringa said, “so with unemployment not where we’d like it to be in the entire country where we sit with jobs, but we can’t fill them because of the skills gap.”

Iowa Association of Business and Industry president Mike Ralston cited the experience of a battery manufacturer in southern Iowa which has job applicants take a basic, 28-question math exam.

“Only half of the applicants with a high school diploma score above 60 percent,” Ralston said.

“The point is that if we don’t do something, if we don’t reform our educational system it’s continued decline will really impact the economic future for all of us and thus the quality of life for all of us,” Ralston said.

Governor Branstad calls the education reform package that cleared the Iowa House last week “progress” but now attention shifts to the Iowa Senate which will be the next stop for this policy debate.

Find the audio of the governor’s weekly news conference here.