About 250 people gathered inside the statehouse this morning to lobby legislators on the same-sex marriage issue.

“Let the people of Iowa vote on the definition of marriage,” Bob Vander Plaats, president and CEO of The Family Leader, said to applause, cheers and whistles from the crowd that gathered for a mid-morning rally. 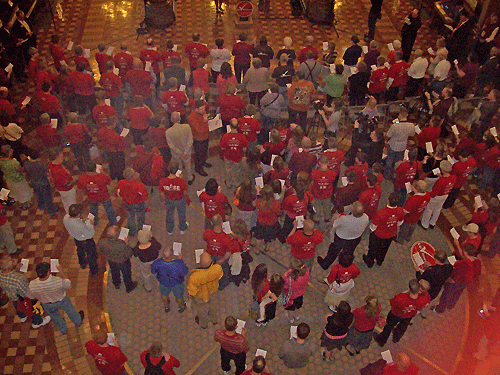 Vander Plaats urged the crowd to meet with senators and urge them to pass a resolution that would let Iowans vote on a constitutional amendment that would declare the only legal marriages in Iowa are between a man and a woman. Vander Plaats suggested “marriage equality” is a perilous path.

Brian Brown, president of the National Organization for Marriage, made the trip from D.C. to Des Moines to speak at today’s rally.

“I don’t care what the odds are and I know many of you don’t either. What I do know is that we were born for such a time as this,” Brown said. “We were born to stand up and speak truth to power.”

“Whenever you talk to a senator — Democrat or Republican — pray with them,” Baker said. “Pray with them that they can make the best decisions and honor God.”

About an hour later, a group that supports same-sex marriage held a news conference outdoors, on the steps of the statehouse. Senator Matt McCoy, a Democrat from Des Moines who is the only openly gay member of the legislature, blasted Vander Plaats and dismissed the rally as a “stunt” designed to attract media attention.

“The truth needs to be told,” McCoy said. “Bob Vander Plaats needs to get a real job instead of working on spreading a message of hate and discrimination.”

Reverend Matt Mardis-LeCroy of Plymouth Congregational Church in Des Moines who has married same-sex couples spoke at the news conference, too. He said The Family Leader does not speak for all people of faith.

Melanie Muth and Tammy Steinwandt of Solon married shortly after the Iowa Supreme Court issued a ruling which legalized same-sex marriage in Iowa.

“It was a blessing,” Steinwandt said. “It was what we had been hoping for, what we had really been praying for and what we wanted so that we could take our relationship to that next level.”

“Today we want to make sure that Iowa families don’t get lost in the noise,” Rongerud said.

Same-sex marriage is legal in five other states — Connecticut, Massachusetts, New Hampshire, New York, Vermont and the District of Columbia. Same-sex marriage laws have passed in Maryland and Washington state, but have not yet gone into effect.