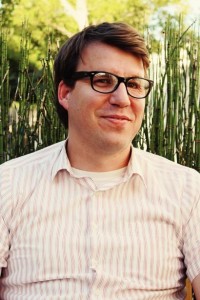 An accomplished author who studied at the University of Iowa is returning to his college town on Wednesday to promote his new book.

Reviewers say Kevin Moffett is one of today’s funniest fiction writers, but his latest collection of short stories frequently employs a dry wit to cover much more serious concepts.

The new book is called, “Further Interpretations of Real-Life Events.”

Moffett says, “It’s eight stories, all of them self-contained, but exploring similar themes, grieving, loss, people who are in these in-between moments, trying to arrive at a decision.”

Moffett was in Iowa City to attend grad school at the U-of-I from 2003 to ’06. The 39-year-old is a Florida native who now lives in California, teaching graduate creative writing at Cal State University in San Bernardino.

His first book, “Permanent Visitors,” was a collection of short stories that won the Iowa Short Fiction Award in 2006. He says that book set the bar, in a way.

“After my first book came out, it got a great review in the New York Times, but the last line was: ‘We’ll look forward to a novel from him in the future,’ so it was both a teriffic review but also in a certain way it was kind of condemning me to work on a novel for a while because I did feel a lot of pressure.” He says he does have a novel in the works.

Moffett’s reading from “Further Interpretations…” will be held in Iowa City’s downtown independent book store, Prairie Lights, which holds a very special place for the author.

“I was just thinking about this the other day,” Moffett says. “My son learned how to walk in Prairie Lights, in the basement there. He was playing on a bead table and he let go and walked from the bead table over to me, so I have really fond memories of the town.”

AUDIO: Full 5:30 interview with the author

Moffett says he plans to read a couple of his shorter short stories during the event at Prairie Lights, which will include a Q-and-A session.

He says, “I love talking to the audience, answering questions and having an extended conversation after the reading either about the book or about writing or about anything prompted by the reading itself.”

The reading is scheduled for 7 PM Wednesday. It’s his only Iowa appearance on this book tour.