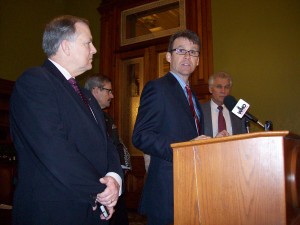 Senator Joe Bolkcom (at podium), a Democrat from Iowa City.

Two state senators are traveling the state today with a “You Are At Risk” warning. The two are opponents of a bill that would give state utility regulators authority to grant MidAmerican a license for a new nuclear power facility in Iowa.

Senator Rob Hogg, a Democrat from Cedar Rapids, is urging Iowans to call their legislators and the governor to register their opposition.

The bottom line is if nuclear is too risky for Wall Street investors, it is too risky for utility customers, the small businesses, the farmers and the seniors living on fixed incomes that we all represent,” Hogg said this morning during a statehouse news conference.

Hogg is making stops in Sioux City and Fort Dodge this afternoon to spread his message. Senator Joe Bolkcom, a Democrat from Iowa City, will be in Iowa City over the noon-hour and in Davenport this afternoon to voice the same concerns.

“Iowa utility rate-payers will face significantly higher electrical rates because of the hundreds of millions if not billions of dollars that we would be required to pay for the design, licensing, permitting and construction of a nuclear power plant,” Bolkcom said.

Eight other Democrats in the senate who are opposed to the bill also attended the news conference, but made no public statements. Republican opponents of the bill were not invited.

MidAmerican executives say the utility will not be able to meet increased demand for electricity without more electric-generating capacity, and power plants that use coal face tough new federal rules that require costly improvements or closure. Nuclear power, they say, provides a steady stream of power to meet that demand, unlike wind power which is intermittant and cannot yet be stored for later use.